If you’re like most people you spend at least a few hours a day in the car–whether it’s commuting to and from work, running to the grocery store or picking up the kids from a soccer game.

But though you might think twice before touching the seat on a public bus or holding the rail on the subway, you probably don’t think too much about your car’s cleanliness. Sure, there are coffee stains from a few weeks ago on your cup holder and an inch of dust coating your dashboard. But it isn’t hurting anybody, is it?

Research shows otherwise. Charles Gerba, a professor at the University of Arizona who has been researching germ hot spots for years, showed in a 2006 study that our cars are littered with bacteria–and in a few places you might not expect.

The dashboard, for instance, turned out to have the second-largest amount of microorganisms present. While often untouched, its vents may draw bacteria via the air circulation system. The fact that it’s usually the warmest spot in a car, since the sun shines directly on it, also promotes germ growth. A spot where you’ve spilled liquid or food particles may look harmless. But spills produced the most bacteria among the car sites tested. The steering wheel, gear shifter and control knobs are other common places inside your car where germs were found since they are touched every day. At least 9 times as many germs as a public toilet seat.

We offer the PurTeq Odor Removal and anti-bacterial protection system. Formerly know as Drivepur. It is the most effective all natural in-car treatment available. This process kills all airborne microorganisms and surface contamination including bacteria, germs, viruses, allergens, dust mites, mold, mildew, sour milk and vomit. It also kills pet odor, cigarette smoke odors and nicotine odors permanently while leaving your car or truck smelling clean and fresh without any overpowering perfumed odor. Titanium Dioxide (Ti02), a food grade nano coating that is odorless, tasteless and harmless to humans and animals is used as a photocatalyst, meaning that with UV exposure it will continue to kill germs and bacteria day after day for months at a time.

Our PurTeq system product is disbursed through a specially designed fumigation device to atomize our concentrated anti-bacterial solution into an ultra fine mist containing hundreds of millions of microscopic “nano-sized” cleaning particles that kill and protect all infected areas in your cars interior.  PurTeq not only kills bacteria inside your vehicle but cleanses your ventilation system as well. This is possible by using our fumigation device along with running your air conditioning system at the same time. Your cabin air filter is replaced during this process.

Molds, bacteria and viruses can affect you and your children’s health. Make an appointment today to get your vehicle’s interior safe for you and your family. Go beyond clean with PurTeq.

Auto Salon at Leschi is a certified service provider of PurTeq Protection Systems in the Seattle area (formerly known as Drivepur Systems). We use only these certified and approved products from PurTeq.

An exceptional odor removal product that is effective at getting rid of all odors including tobacco odors. The power of Smok is its ability to penetrate and react with the components of tobacco smoke (tar and nicotine) dissolving and converting them into non-toxic gaseous molecules without causing any damage to fabrics, materials or hard surfaces.

PREVNT is what makes the DrivePur system truly unique. Prevnt is composed of titanium dioxide, an antibacterial UV activated surface coating that provides continuous protection against odors and indoor air pollutants. Prevnt inhibits the growth of a wide array of odor causing bacteria, mold, fungi, and algae on any surface. 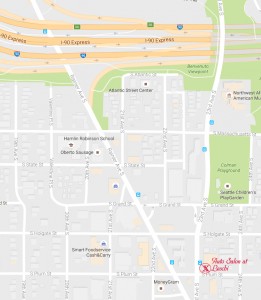 Specialty Services:
The following specialty services can be added to a detail for your convenience. Windshield Replacement, Wheel Repair, Paintless Dent Removal and Leather / Vinyl Repair.